Canada wins U23 silver and bronze

Canada claimed two medals on Saturday in Italy at the World Rowing U19 and U23 Championships, with Grace VandenBroek and Elisa Bolinger winning silver in the U23 women’s double and Stephen Harris winning bronze in the U23 lightweight men’s single.

This is the second international medal for VandenBroek, who previously won bronze in the U19 women’s double in 2017, and the first for Bolinger and Harris.

VandenBroek and Bolinger started the 2022 international racing season in Lucerne, taking thirteenth place in the women’s double at World Cup 3. After placing second in their heat, they crossed the line first in the A/B semifinals to progress to the A final.

“Racing needs to be fun, so as a way to just lighten the mood, I always come up with some weird joke,” VandenBroek said of the pre-race tradition that they started in Lucerne. “I usually ask a couple people around when I’m warming up, and like to try to make Elisa laugh on the start line.”

The double spent much of the race in fifth or sixth place, making a final push in the last 500m to clinch the silver medal with a time of 7:04.70.

“I think we just saw the red buoys and we just put the heads in and just went for it. We know we have watts and we use that to our advantage,” said Bolinger. 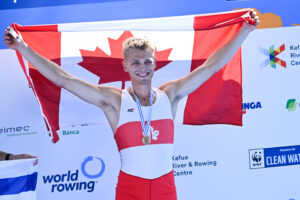 Harris, who won the U23 and open lightweight men’s single titles at the 2021 National Rowing Championships, also represented Canada in 2019, rowing in the U19 men’s quad. Harris qualified for the A final after placing second in the A/B semifinals.

“[The final] was a crazy race,” said Harris. “It was so choppy at the start and it was so stressful going into it, and I just had to take a deep breath and be like, whatever happens, happens.”

After battling for the third place spot with Argentina and Germany, Harris pulled ahead to take bronze in 7:17.56.

“About 10 metres from the line is when I fully accepted it [winning a medal], and it was crazy. It means everything. I started in the single, and to win in the single has been a dream since I was a kid.”

Canada’s U23 pairs raced in A finals on Friday July 29, with Maya Meschkuleit and Leia Till finishing fourth in the women’s pair and Julian Black and Joel Cullen coming fifth in the men’s pair. The U23 men’s eight finished third in the B final to come ninth overall.

The U19 women’s pair of Mira Calder and Sophia Regosa will race in the A final on Sunday July 31 at 3:10am PT/6:10am ET. The remainder of Canada’s U19 crews will contest the B finals.

Click here for more information on the 2022 World Rowing U19 and U23 Championships. All races on Sunday July 31 will be livestreamed on www.worldrowing.com

Click here for more information on the members of Canada’s 2022 NextGen National Teams.

In support of the U23 and U19 athletes, RCA launched a fundraising campaign to reduce fees associated with international competition and ensure that athletes do not face financial barriers to representing Canada on the world stage. To make a contribution and help Canada’s rowers focus on giving their all on the water, please visit fundrazr.com/2022RCANextGen