Merle Taylor: Beyond the Boat

It was a chilly weekend evening in 2012. Fall was turning into winter, and Peter West and his St. Francis Xavier University (StFX) rowing teammates arrived at Merle Taylor’s house to put up her Christmas lights.

Peter had never met Merle before, but it soon became clear that this would not be his last visit to her home at Glenhill Berry Farm. When the lights were up, Merle invited the team in for a hearty meal and fireside chat about her experiences teaching Morse code to pilots during World War II. 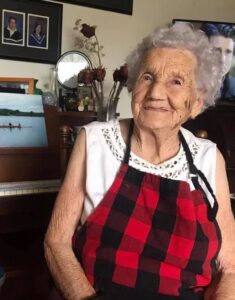 Numerous StFX rowers have similar stories of how they first met Merle, who is turning 97 years old on August 2 and has been a pillar of Nova Scotia’s Lochaber community since settling there in 1946.

“The first few times I met Merle were for team breakfasts at her house,” said former StFX rower Adelaide Wimpenny. “A few times a season she’d give us a call when we were on our way to the lake to say that after practice she’d have blueberry pancakes ready for us.”

Merle’s hearty team meals are always followed by a few rounds of crokinole (with sticky buns as prizes) and some lessons in Morse code. “I just remember lots of stories, lots of laughter, lots of fun,” said Peter, who graduated from StFX in 2014.

A generous volunteer and active community member, Merle first connected with the sport of rowing after the StFX Rowing Club and Antigonish Rowing Club moved to Lochaber Lake in 2012 as part of the project to rebuild the Sylvan Hall community centre (now called the Lochaber Centre). 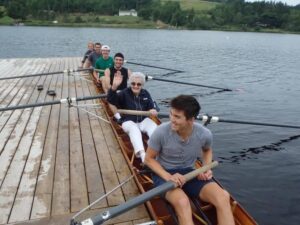 Merle in the boat named after her.

Often described as the matriarch of Lochaber, Merle was honoured by the rowing clubs with a boat naming ceremony as a means of demonstrating their gratitude and respect for Lochaber’s residents and the community centre’s key user groups.

“Well, that was a shocker!” said Merle, who was surprised with the naming at the annual Lochaber strawberry festival. “We walked to the lakeshore and there was this 65-foot brown boat with my name on it, and it was almost too much for me … Of course, I’m very, very proud, extremely proud.”

Merle quickly became an unwavering supporter of the StFX rowing team, often heading down the road from her farm to pull over by the lake and cheer them on when they hosted races and adorning her dining room walls with team photos.

“Going to school in such a small town, a lot of the people on our team are very far away from home, so being welcomed into Merle’s home and getting a homecooked meal and having that kind of environment that we were welcomed into with open arms was always so comforting,” said Adelaide.

“I think the support the StFX Rowing Club received from the Lochaber community and from people like Merle was, and definitely remains, fundamental to the success of our sport,” said Peter.

For Merle, it’s the people she’s met that have drawn her to the rowing community.

“The rowing club kids are so dedicated,” said Merle. “I got to know just a wonderful, wonderful group of young people.” 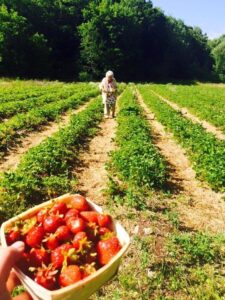 Merle on her strawberry farm.

Antigonish Rowing Club President, StFX Rowing Club Head Coach and Row Nova Scotia President Katie Edwards has become close friends with Merle since meeting her in 2012, and has seen Merle make long-lasting connections with the StFX rowers, many of whom keep in touch with her well after graduation.

“Merle is a woman who knows the value of work,” said Katie. “She’s like, you know, there’s a bunch of young people that get up at 5:00 in the morning, they come out here every day, they grind away. I think that’s what she respects, that’s the language she speaks.”

Merle is also known for her natural teaching skills and competitiveness, characteristics that have helped her form a bond with the many rowers that have come through her door.

“I think she takes an extraordinary amount of delight not only in teaching people, but she’s also really competitive with people,” said Katie. “She is unapologetically competitive, and so I think that really hit a nerve, particularly with the young rowers.”

“I think it’s cool because that’s a real point of resonance. The rowers are integrally competitive people and so I think that has sort of translated back and forth with the team.”

“I felt like it was really emblematic of that community that has enabled us to feel welcome, to feel like we belonged, to feel supported,” Katie said of the Merle Taylor Award for Team Spirit. “We created that award to acknowledge that there are people in the community that do a lot to contribute to the culture of the sport that has nothing really to do with winning or losing.”

Every so often, Merle asks the StFX team to give her a ride down to the lake to check on her boat, which hangs in the rafters at the boat house, a constant reminder of Merle’s community-shaping selflessness and support.

“She is a special person because she’s authentic always, there’s no guile, there’s no pretense, and that always really resonated with me,” said Katie.

“For me the essence of being maternal is unqualified support, and she’s just been that for us. She just really has been at our side since the beginning.”

RCA would like to extend a thank you to Merle for her great support of rowing in Nova Scotia. Happy Birthday Merle!

Do you know someone who is contributing to the Canadian rowing community in a special way? Email us to let us know so we can share their story!