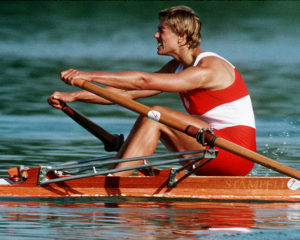 Silken Laumann will be remembered for the tenacity she showed in overcoming injury as much as she will be for her Olympic medals. Laumann gave up competitive running in 1982, encouraged by her sister, Daniele, to take up rowing. Within a year she had earned a place on the Canadian national rowing team and, as a member of the quadruple sculls crew, won gold at the U.S. championships.

In 1984, Laumann and her sister rowed to a bronze medal in the double sculls at the Los Angeles Olympics.

In the late-1980s, Laumann was recognized as one of the world’s top rowers. She captured a gold medal at the 1987 Pan American Games and a silver medal at the 1990 World Championships.

Awards followed her gold medal in the single sculls at the 1991 World Championships, as Laumann was named the 1991 recipient of the Lou Marsh Trophy, the Velma Springstead Trophy, and the Bobbie Rosenfeld Award (the first of two consecutive awards for Laumann).

She entered 1992 as the Olympic favourite in her event, but tragedy struck during a warm-up race in Essen, Germany on May 15 of that year. Laumann suffered a serious leg injury when her shell was broadsided by a German doubles crew. Five operations and a skin graft were only part of her three-week stay in German and Canadian hospitals as doctors pronounced her Olympic dreams over.

Laumann, however, embarked on a remarkable recovery. Unable to walk, she was helped from her wheelchair into her shell and, for five weeks, trained for the Barcelona Games. She realized her Olympic dream by winning a bronze medal in Barcelona in the single sculls.