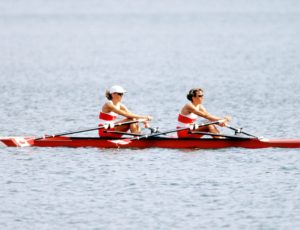 The duo of Colleen Miller and Wendy Wiebe is one of the most successful partnerships in the history of Canadian rowing, with the two rowers having won three consecutive World Championship titles in the lightweight women’s double in 1993, 1994 and 1995. They were the first lightweight Canadian women to race at the Olympics when lightweight events debuted in Atlanta in 1996. They paved the path for the enduring success of Canadian lightweight women who wear the maple leaf on the world stage.

Wendy Wiebe was born in St. Catharines, Ontario in 1965, and made her international racing debut as a junior in the coxed four at the 1983 World Junior Championships. For the next 13 years, Wendy made the Senior National Team an impressive 10 times, competing in every lightweight boat class. She brought home a silver medal in the lightweight eight at the 1984 Worlds in Montreal, but had her best success with three different partners in the lightweight double. She secured a silver medal with sculling partner Brenda Colby at the 1990 Worlds in Tasmania, and a fourth place finish the next year in Vienna with Michelle Darvill. Going alone in 1992, Wiebe earned a bronze medal in the lightweight single at the Montreal Worlds. In 1993, Wiebe was named Athlete of the Year in her hometown of St. Catharines. That same year, she teamed up with Miller to begin their auspicious three-year run.

In June of 1996, Miller and Wiebe won the Lucerne Regatta, defeating the Americans and the Germans to capture gold, and setting high expectations for the Olympics in August. In the summer edition of the Rowing News, the editor made a bold prediction for Miller and Wiebe. He wrote:

“Comparable to Redgrave and Pinsent’s, the international record of Canada’s Miller and Wiebe defines dominance. Defending World Champions since 1993, the duo’s few second-place finishes have come at the hands of US scullers Lindsey Burns and Teresa Zarzeczny-Bell. Throughout the European season, however, Miller and Wiebe kept the Americans at bay by an average of 10.92 seconds in their three meetings. While anything can happen in any type of racing, it will take the strangest of strange occurrences to keep the Canadian duo from off the top shelf of the awards podium.”

That strangest of strange occurrences came in the form of an ill-timed flu virus for Wiebe on the eve of the regatta. Miller and Wiebe were denied the Olympic success they so richly deserved, but they bravely battled through the illness to finish seventh overall, showing that champions are defined not just by how they behave in victory, but how they react in defeat. Their courage and grace amidst disappointment was a shining example to all Canadians, and it only enhanced their reputation as champions.