Werbicki and Loutit remained in second place throughout the race, finishing just behind Chile’s duo of Melita Abraham and Antonia Abraham with a time of 7:36.06.

“We adjusted our race plan to go a bit faster off the start because we knew the Chileans had a fast start. We took the start a bit more aggressive and we found ourselves in second place coming through the 1000 and we were pretty relaxed about that,” said Werbicki. Her and Loutit also finished in second behind Chile in their preliminary race. “We decided to do a final sprint and we ended up coming closer to the Chileans than in the heat, which is exciting.” 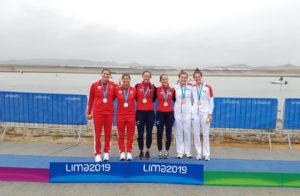 Luc Brodeur (St. Catharines, ON) and Graham Peeters (Omemee, ON) finished sixth in the Men’s Double A final in their first senior racing competition. Brodeur and Peeters reached the A final after winning their Men’s Double repechage on Tuesday with a time of 6:26.77.

In Canada’s last race of the day, Layla Balooch (Burnaby, BC) and Shannon Kennedy (Toronto, ON) came sixth in the Women’s Double A final.

How to Follow Racing
Select races may be livestreamed on CBC Sports
Schedule and results available at www.lima2019.pe/en